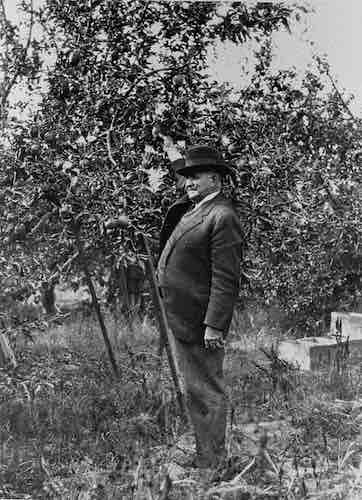 In 1898, C.C. Campbell, a former judge and lawman from Sioux City, Iowa, headed west to find a “land of opportunity.” The Judge walked from the end of the Washington Central Railway line (in Wilbur, Washington) to Lake Chelan – a three day hike. Once the Judge saw the untouched, rugged landscape surrounding a beautiful, crystal clear lake, he moved his family to Chelan and became their permanent home. The original hotel property was purchased for $400 in 1898. The seller is famously quoted saying he’d “sold a sand dune to a sucker.”

The original 16-room hotel (named the Hotel Chelan) opened in 1901 and was operated by the Judge and his wife, Caroline. The goal was “to erect a hostelry of the type that would be a credit to the community.” The hotel accommodated all walks of pioneer life, from teamsters and prospectors to homesteaders and tourists – each served with trademark hospitality and Caroline’s famous cooking.

The Judge and Caroline had one son, Arthur Campbell. Arthur was a part of the first Chelan High School graduating class in 1908, then went on to graduate from the University of Washington with a law degree in 1914. A strong man, Arthur kept himself busy at UW with athletics (track & field, wrestling, and rowing on the crew team). Post graduation, Arthur served in World War I and married his wife Ann Monfort. Art and Ann had two sons, Arthur II and Daniel.

Upon his return to Chelan, Arthur I and his family got their hands dirty by planting an apple orchard – affectionately named the 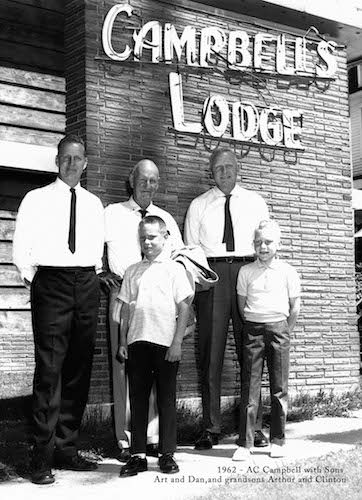 No-See-Um Orchard. Renowned for his hard work and physical strength, Arthur I dug out the basement of the original hotel with a shovel and wheelbarrow to create a larger restaurant to keep up with growing demand. The business was growing through the 1920’s, but then The Great Depression began. Like many small businesses, the family came together and sacrificed to make ends meet. With the help of the Holden Mine and the Howe Sound Mining Company, the Lake Chelan economy rebounded in the late 1930’s. 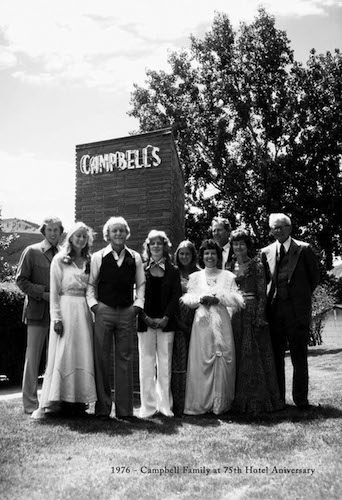 By the 1940’s, Arthur II and Dan were growing up. After attending college, both Arthur II and Dan served their country for the Navy and Army, respectively. Upon their return, both assisted in the operation of the family businesses of Campbell’s Resort and No-See-Um Orchards. This began the modern era of Campbell’s Resort – the tourism economy was in its infancy at Lake Chelan and the Campbell’s started to develop fishing cabins and started on growth plans for the future. During this time, Arthur II and Dan had a genuine interest in the Lake Chelan community – serving on the Chelan Park Board and City Council. They participated in the development of the 18-hole Lake Chelan Municipal Golf Course, as well as the planning and development of the Riverwalk Park. Both the Golf Course and Riverwalk Park are cornerstones of the Chelan’s recreation environment today.

Dan Campbell married Fern Eminger, and together had a son and a daughter, Clinton and Bonnie.
Arthur Campbell II married Kathleen Dowling, and one son and two daughters, Arthur III, Nancy, and Sally.

The first motel units were constructed in 1955 with the “original” Lodge 1. Lodge 4 was developed in 1963. Surrounding the two motel buildings were a swim and dance pavilion, lush grounds, fishing cabins and a dining room. In 1972, Lodge 2 was developed. In 1976, the business celebrated its 75th anniversary with the fourth generation – Art III, Clint, Sally, Nancy, and Bonnie – growing up in the business. Arthur III and Clint returned to the family business in the late 1970’s. 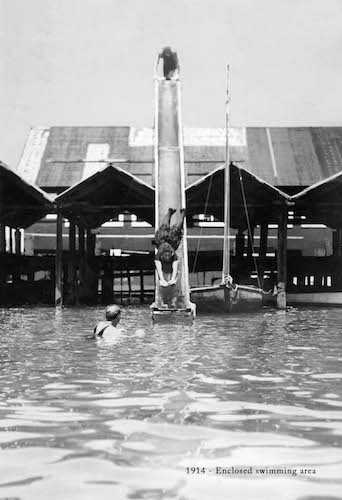 Bonnie Campbell married Lonnie Avery, and together had a son, Travis.

The 1990’s represented a great leap for the business – Lodge 3 was developed in 1990, Lodge 1 was redeveloped in 1997, and more meeting space was added with the development of the Stehekin Ballroom in 1997. Campbell’s Resort celebrated its 100th year of continuous operation in 2001. In 2008, Campbell’s Resort underwent a room renovation with the international, award winning Dawson Design to create a custom Campbell’s Resort guest room. During this time, the fifth generation Campbell was working in all facets of the operation – front desk, restaurant, yard crew – as they grew up, and pursued their education. Arthur III’s sons, Eric and Tom Campbell, returned to Chelan in 2010 and 2012 (respectively) to assist with resort operations.

In 2013, the Campbell family started a hospitality management company, the Campbell Management Company (CMC). The CMC also owns and operates the Midtowner Motel.