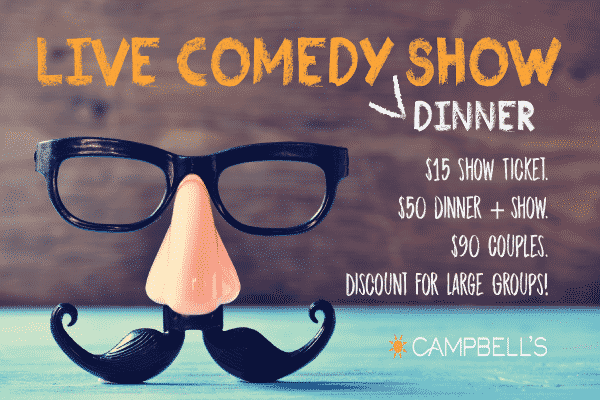 It’s April Fool’s Day, so Campbell’s Resort decided to partner with LAPH Productions to bring you an April Fool’s night of stand-up comedy. Comedians Kortney Shane Williams(view video) and Brent Flyberg will headline an adult night out, including a prime rib dinner, full-service bar, and night of laughter in a unique, intimate venue with two of the hottest comics in the Northwest. Intended for a mature audience. 21+ only.

Doors open at 7 pm with our famous prime rib buffet followed by the live show at 8 pm.
Shake winter off with a good laugh!

Kortney Shane Williams is an internationally touring comedian. He started his comedy career while attending The University of South Florida in Tampa, FL. He ended up in Seattle Washington for what he thought was a week of shows, but soon turned into a place where he would hone his craft. The master of satire has been a part of The Bridgetown Comedy Festival, Boston Comedy Festival, Laughing Skull Comedy Festival, and Bumbershoot Arts festival. Kortney’s self-deprecating humor has won him finalist spots in both Comedy Central’s South Beach Comedy Festival Competition and NBC’s Stand-Up Showcase. Kortney has opened for Hannibal Buress, Mike Wilmot, Darryl Lenox, David Alan Grier, and Dave Chappelle. He has appeared on CBS, Comedy Time at the Icehouse, Laughs TV on Fox, and The 206 on NBC. His writing he has been featured on Yahoo while his comedy sports blog Comedic Prose is regularly highlighted on FoxSport.com. Kortney’s personable style of joke telling makes him a must see act. Currently, he can be heard on Pandora, Spotify, or find his weekly Podcast “Kortney’s Last Show Podcast” and latest comedy album, I’m Right About This on iTunes.

According to his mother, Brent Flyberg was born with both a full head of hair and a thick, black mane running the length of his spine. In the fifth grade, Brent was not invited to a classmate’s birthday party. He has spent most of the intervening 15+ years trying to prove to the children who made the invite list that he’s a blast at parties. Brent’s goofs have been observed in the Melbourne International Comedy Festival, Bumbershoot Music and Art Festival, and Bridgetown Comedy Festival. If he warms up first, Brent can dunk a volleyball on a regulation size hoop. He thanks you for reading.