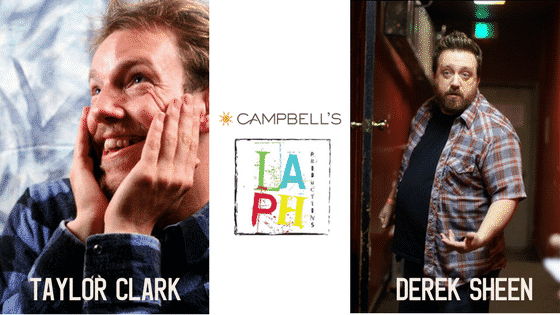 It’s almost April Fool’s Day, so Campbell’s Resort decided to partner with LAPH Productions to bring you an April Fool’s night of stand-up comedy on March 31. Comedians Derek Sheen and Taylor Clark will headline an adult night out, including a banquet buffet dinner, full-service bar, and night of laughter in a unique, intimate venue with two of the hottest comics in the Northwest. Intended for a mature audience. 21+ only.

Doors open at 6 pm with a dinner buffet followed by the live show at 7:30 pm.

Shake winter off with a good laugh!

Derek Sheen is a cuddly mess of insecurities, a gifted storyteller, actor, and writer. He’s quickly become a favorite among comedy fans all over the globe touring with Patton Oswalt, Brian Posehn, Janeane Garofolo and Rory Scovel! View a sample of his show!

Taylor Clark started his comedy career in Seattle but quickly left to New York where he has spent the last 10 years performing throughout the five boroughs, and beyond alongside some of the biggest names in standup comedy. Now he’s back in the NW with a wife, a kid, and an adult skateboarders take on being a grown up.